Part of my new Foundations and Origins posts where songs and music that influenced today’s genres such as Electro/Hip-Hop, Bass, Dubstep, Trap and more are highlighted. Our first post will feature an early example of the now, well-established genre of its own Moombahton a blend of house and reggaeton. 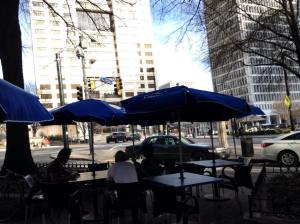 Today was a hot day in the ATL and a preview of Spring as temperatures reached over 75 degrees F. What better way to chill out and relax at the park, pool or outside in the city then by listening to this Throwback remix of Gwen Stefani’s classic “Hollaback Girl.” This particular remix puts a Moombahton feel on the song with elements of dancehall and reggaeton, which by no means were brand new then (in 2008) but were being established as genres in their own right. Gwen’s songs have been remixed into hip-hop and more often, electronic remixes for years now such as the highly successful Jacques Lu Cont progressive house remix of her “What You Waitin’ For?” from 2008 as well.